When I was a child reading through my fairy tales and delightful stories of adventure and discovery, there would always be the occasional reference to some delectable sounding food that my favourite characters would be devouring.

Roald Dahl made it very clear that his sugar obsession was very present throughout his literature where many of his books were centred around food. If your mouth didn’t water throughout the  duration of Charlie & The Chocolate Factory (except of course when they ate horrid cabbage soup) then your taste-buds must have been defective. I for one dreamt of biting into The Giant Peach and drinking from the chocolate waterfall. But the yummy treats didn’t stop there… Enid Blyton also created delicious sounding imaginary food that made real food seem banal. In The Magic Faraway Tree, there was even a Land of Birthdays and there was always cake and candy and delicious Moon Face Lemonade.

So this month we decided to let you relive your childhood fantasies and recreate your dreams. Making them was simple enough and eating them was like tasting your childhood all over again; the care-free, sweetness of being a kid, in a fantasy world, with all your favourite characters.

The Magic Faraway Tree (Enid Blyton)
“Silky was pleased. She sat there brushing her beautiful, golden hair and ate sandwiches with them. She brought out a tin of Pop Cakes, which were lovely. As soon as you bit into them they went pop! and you suddenly found your mouth filled with new honey from the middle of the little cakes.”

One: Preheat oven to 180° C, and line a baking tray with baking paper.
Two: Using an electric mixer, beat butter, sugar and vanilla in a small bowl until pale and creamy. Add egg and mix until well combined.
Three: Sift flour and baking powder over butter mixture. Add milk and stir until just combined.
Four: Roll the dough out to about 2cm thickness, and cut into rounds. Make a slight indent with your thumb in the centre of each biscuit round (Your filling will sit in this later)
Five: Arrange these on the baking sheet, and bake for 15-20 minutes, or until the tops of the biscuits are just turning golden brown. Remove from oven and let cool.
Six: While the biscuits are cooking, you can make the filling. Using a mixe, beat the butter and honey together until they are light and fluffy, for around 2 minutes.
Seven: Add the remaining ingredients, and mix. There should be no lumps of butter or icing sugar when you are done.
Eight: Transfer the filling to a pastry bag, or a Ziploc bag with one corner snipped off. In a pinch, you can also spoon the filling into the biscuits, but piping it on is an easier, neater job.
Nine: Pipe about 1 tsp. of the filling onto the dip in the biscuit (a bit more for larger biscuits), and place another biscuit on top. Enjoy the pop!

The Lion, The Witch & The Wardrobe (C.S. Lewis)
“At last the Turkish Delight was all finished and Edmund was looking very hard at the empty box and wishing that she would ask him whether he would like some more. Probably the Queen knew quite well what he was thinking; for she knew, though Edmund did not, that this was enchanted Turkish Delight and that anyone who had once tasted it would want more and more of it, and would even, if they were allowed, go on eating it till they killed themselves.” 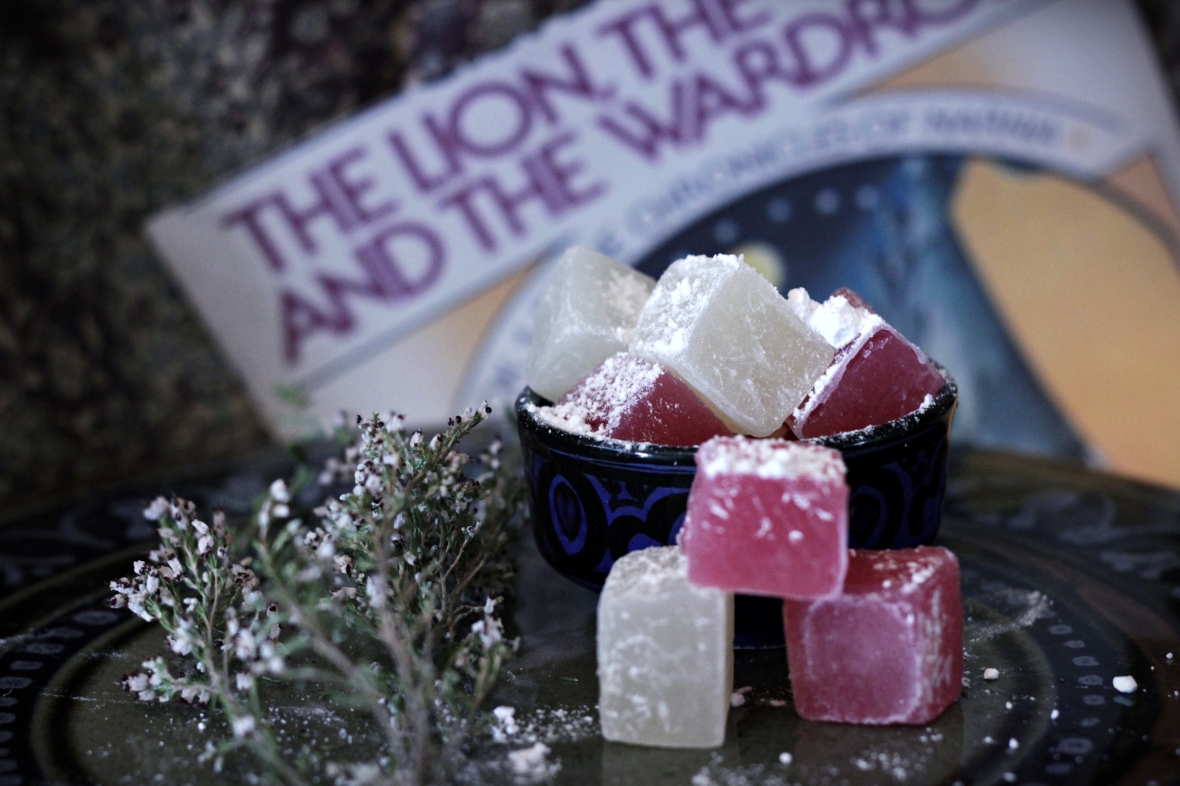 One: In a pot, put half of the water (500 ml) with the sugar and lemon juice and bring to the boil. Boil it down until you get a light syrup (here those with the sugar thermometer will go to about 240 degrees, I just waited for the mixture to thicken a little).
Two: In another pot, mix the remaining water with the corn flour, then bring to the boil and simmer, stirring, until the mixture thickens. Add the hot sugar syrup and stir well.
Three: Now let the pot simmer, without stirring, for at least 30 minutes. More would be good, if you are patient, 45 minutes to one hour will make it rather thick, which is good, kind of like shop Turkish Delight. Still, the more you cook it the harder your Turkish Delights will get.
Four: At the end add a tbsp of rose water, and to colour it, the food colouring.
Five: Pour the hot mixture into a square or rectangular plastic container (easy to detach the solid block after it sets) and let it cool down and set overnight.
Six: The day after, tip out your ‘candy’ block and cut into pieces. To dust it, I used a mixture of corn flour and icing sugar (The corn flour helps the icing sugar not turn too sticky)
Seven: If your sweets seems too ‘wet’ after cutting them, place them on a oven tray and bake them at 50 on fan for a short while to dry. Store them in layers divided with paper, and dust regularly with a mixture of corn flour and icing sugar to keep them dry. Eat within a few days. Turkish Delights are Vegan and Gluten Free. 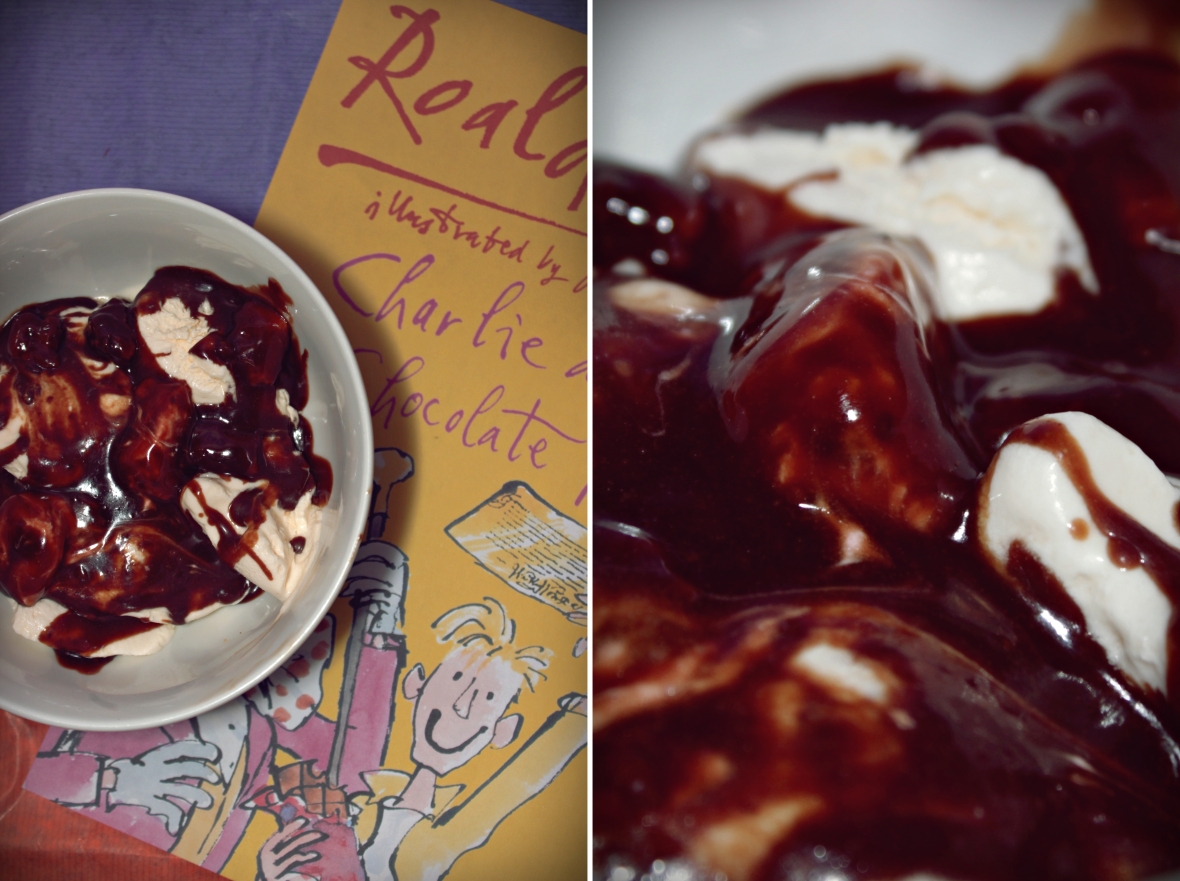 One: Break the chocolate and the Crunchie into large chunks and set to one side
Two: In a saucepan, over low heat, melt together the butter, sugar and cream.
Three: Stir until all the sugar has dissolved and then turn the heat up and continue to stir for another 10 minutes.
Four: turn the heat down and retrieve your ice-cream
Five: Put the marshmallows, chocolate and Crunchie into the saucepan mixture, stir a couple times until slightly melted and then pour over your ice-cream.